By Zaz Hollander: A Mat-Su mechanic is accused of stealing nearly half a million from scores of victims. That’s just this time.


By Daniella Rivera: Family waiting on moving company to deliver– 6 months & $23K later
KTVA received several text messages from the employee’s number asking that this story not be reported. One message reads, “Running the story will prevent us from being able to get Sandor shipments and others out to them.”

The company has not yet given a specific date for the release of the Sandor family’s shipment.


By Liz Raines: Thousands of Alaskan teens experience dating violence: What you should know

If you talk to Tammy McMannon for just a few minutes, you’ll hear compassion in her voice. She’s been a nurse in the military for nine years, and she often works night shifts, caring for adult patients in the ICU.

But Tammy’s compassion knows no bounds. She works exclusively with adults doing her job as a nurse, so she’s determined to give back to local children in her spare time. She says, “Volunteering at Make-A-Wish gives me the interaction with children that I don’t have in my career.”


By Sean Maguire: Injured bear spotted on the outskirts of Kodiak


By Chris Klint: ‘The Price Is Right’ makes things right with Bethel winner


By Kyle Hopkins: Charges: Former employee stole more than $105,000 from non-profit that assists AIDs patients
The non-profit is a recipient of state and federal grants. In some cases, Bohall stole money belonging to clients of the non-profit, according to the charges.


By Leroy Polk: After over a year, man arrested in Alaska village for murder of childhood friend


By Victoria Taylor: Assembly discusses ordinance to address drone use within APD
During a work session Friday, assembly members reviewed the ordinance, submitted by assemblyman Forrest Dunbar. The document will be up for public comment at the February 13th Assembly meeting.


By Blake Essig: Operation Afghanistan: Serving with your spouse
Staff Sgts. Nicole and Charles Detwiler met six years ago, a few weeks before their first deployment. They say it was during that deployment they fell in love, and they married a short time later.


Pilot, Accountant and Musher: Ryne Olson does it all


By Daybreak Staff: Mic Check in the Morning: KJ Denhert


By Daybreak Staff: Darryl Worley is in Alaska for the Northern Lights Country Concert Series


By Jack Carney: Alaska rolls out five-year suicide prevention plan
The Alaska Careline can be reached any time at 1-877-266-HELP (4357), or you can go to the Careline website. You can also text “4help” to the number 839863 between 3 and 11 p.m. Tuesday through Saturday.


Congratulations Valerie Baalerud!
By Tegan Hanlon: This Eagle River teacher was just surprised with a national award — and $25,000

By Marc Lester: Video: Watch as the ‘supermoon’ rises over Anchorage


By Daniella Rivera: 2 of 3 men charged in 2015 homicide plead guilty to manslaughter 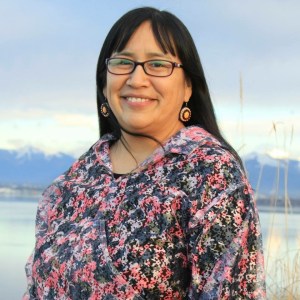 I grew up on the Koyukuk River in Huslia and Bettles/Evansville. I have lots of memories of being in fish camp in the summer and taking rides in the fall. In November, Che Wilson (Māori) spoke at the Tribal Governance Symposium in Fairbanks. He described the river near his homelands and said, “I am the river, and the river is me.” Since then, I’ve been thinking about what the Koyukuk River means to me.

My friend and relative, Sonia Vent, shared about her experience of sewing a ruff made out of rabbit and marten fur. The ruff is for her granddaughter’s parka. A ruff keeps people’s face warm when they have it on a hood. Sonia is Koyukon Athabascan and is from Huslia. Her parents are Freddie and Lorna Vent of Huslia.

Sonia’s experience of sewing a ruff reminded me of my journey for beading and sewing slippers/moccasins for the past year. Taking up a cultural practice can be a spiritual experience. That little knowledge we have is powerful enough to connect us to our culture. I have found beading and sewing to be healing. Learning and practicing our culture is important. She graciously agreed to share her experience. Here it is below.

By Laurel Andrews: Teen tells Fairbanks police he stabbed girl to ‘come back to reality’ during drug trip
Heard is being charged with attempted murder in the first degree. Since he is more than 16 years old and charged with one of the most serious felonies in Alaska law, he is automatically being charged as an adult, according to the Fairbanks District Attorney’s office.


By Daniella Rivera: Judge rules on bail conditions for triple homicide suspect
The judge in a Spenard triple murder case from last year has issued a written ruling on the suspect’s release on bail.

Anthony Pisano, 43, faces first-degree murder charges in the Sept. 12 deaths of 31-year-old Bullion Brothers owner Steven Cook, 48-year-old Kenneth Hartman and 31-year-old Daniel McCreadie. Pisano, formerly an Anchorage-stationed Army soldier, is accused of fatally shooting the three men on at Cook’s business then driving away. After Pisano called APD officers at their off-duty phone numbers, he was taken into custody near the Dimond Boulevard overpass at Minnesota Drive.


By Liz Thomas: These are the 5 safest cities in Alaska


By Liz Thomas: Alaska deemed most dangerous state in US in new report


By Kate Troll: The Woman’s March is evolving into a political force


By Victoria Petersen: Back to the roots: A short history of Mountain View


By Staff Writer: Alaska nordic skiers convey house medals from Masters World Cup
Three Alaska women, including two sisters from Fairbanks and an Anchorage woman whose brother is headed to the Winter Olympics, teamed up to win their relay race at the recent World Cup Masters cross-country ski championships in Minneapolis.

Davya Flaharty, Gina Chythlook and Tamra Kornfield skied to the gold medal in the women‘s 30-34 age group along with Kathleen Dewael of Minnesota. Flaharty and Chythlook are sisters (their maiden name is Baker), and Kornfield is the sister of Olympic-bound skier Tyler Kornfield.


By Devin Kelly: Internet access. Maybe a cafe. And books, of course. A downtown Anchorage library is moving closer to reality.
The Goetz trust became available about two years ago. Now it’s grown to $7.8 million, dedicated explicitly to a library in the main downtown grid. The Anchorage Library Foundation, the nonprofit that raises money for the library, also has close to $2 million for the project.


Presented by BP: Outside the classroom, school staff and volunteers motivate Alaska students
Knowing that he can motivate students to succeed is its own motivation for Mr. Ed. On the rare day when he’s feeling down or discouraged, he said he simply has to look at the bulletin board in his office, which is hung thick with notes from current and former Ocean View students.

“It’s like your confirmation that day: This is what you’re supposed to be doing in life,” he said. “Last week this parent told me, ‘My kid still talks about you. He’s in the Air Force now.'”


By Megan Mazurek: Teacher of the Week: Paula Saindon

By Sean Maguire: 18-year-old from Metlakatla arrested on child pornography charges
METLAKATLA, Alaska (KTUU) – An 18-year-old from Metlakatla has been arrested on 10 separate counts of possession of child pornography. Alaska State Troopers say the images in question “are of children between the estimated ages of 18 months – 10 years of age being sexually abused.”


By Liz Sly, The Washington Post: US soldiers are revealing sensitive and dangerous information by jogging


By Sean Maguire: California woman released after shots fired incident outside Northway Mall
It was determined after a pretrial assessment that Malcolm was “a low-risk” and she was released before a pre-indictment hearing scheduled for Tuesday. The judge asked that she not possess firearms or leave the state of Alaska.


By Anchorage Daily News: Alaska-rooted band Portugal. The Man wins a Grammy for ‘Feel It Still’


By Kalinda Kindle: UAA celebrates the life of professor through musical ensembles


By Suzanne Downing: Fansler: Marching for women by day, smacking them around by night


By Patrica Turner Custard: Stewardship and advocacy, celebrated in winter


By John Schandelmeier: Take the kids outside (and leave the phones inside)

By Tegan Hanlon: Alaska House leadership calls on lawmaker accused of hitting woman to resign
The leader of the Alaska House of Representatives is calling for Bethel Democratic Rep. Zach Fansler to resign after a newspaper reported he assaulted a woman.

House Speaker Bryce Edgmon, D-Dillingham, asked for the resignation in a statement Saturday, minutes after the Juneau Empire published an article online that said local police and the Alaska Department of Law were investigating Fansler for allegedly hitting a woman and rupturing her eardrum.


By Victoria Taylor: UPDATE: 3 arrested after gunfire exchange in Northway Mall parking lot
According to MJ Thim, a public information officer for APD, said the preliminary investigation indicates a group of at least five men met in the parking lot in front of Shockwave Trampoline Parks. “They pulled out their weapons and started shooting at each other in a public parking lot to resolve their issue,” Thim said in a phone call with Channel 2.


By Cameron Mackintosh: Need help filing taxes? Free tax preparation services available in Anchorage
Like last year, Americans will have two extra days to file their taxes in 2018 because the usual April 15 deadline happens to fall on a Sunday, and April 16 is Emancipation Day, which is a federal holiday. So the tax deadline this year falls on April 17.

By Josephine Sedgwick: Snapshots From a Land of Endless Night

By Nancy Lord: 47 years apart, a mother and daughter’s Arctic memoirs complete each other
If Helmericks was the reckless mother committed to wild nature for building character and finding spiritual fulfillment, her daughter tempers that same love of nature with pragmatism. Aspen writes about her mother, “Wilderness remained her true love. The rest of us … were all secondary. This passion for the untamed natural world was her biggest gift she left me, though it took me years to forgive her.”

Trust the river, Aspen advises, although she didn’t always find it easy to do that. There will be surprises around every bend.